I used to play a bit of rugby when I was younger.  Well, quite a lot of rugby in the season.  Mostly at outside centre or on the wing, for those of you who care.  And those of you who play rugby will probably be familiar with the phrase “a hospital pass”.  It’s what happens when the ball’s in play, and you’re running at full pelt down the field, with the opposing side coming straight at you, and the man to your left throws a long, slow, pass to you, and you look up, and realize that the opposing side can see you catching it, and as soon as it is in your hands they can legally smack right into you.  As Andy Dalziel once said, “Football and rugby league are professional games – rugby union is violence for the love of it.”  The reason I mention this, is that a couple of months ago I looked at the preaching rota, and saw someone had thrown me Trinity Sunday, in one of those long, slow passes. 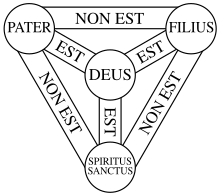 I joke, but Trinity Sunday has a bad reputation amongst preachers, and indeed amongst some congregations.  It is the day in the year when we contemplate the doctrine of the Trinity, one of the greatest mysteries of our Faith.  It is also a day when a series of analogies are often employed to attempt to explain the Trinity.  The Trinity, some say, is like water – we can experience it as water, or as steam, or as ice, but it’s still water.  Thus something can be three and also one.  Or the Trinity is like a rugby team – more than one individual person, but unified in all working towards the same goal.  Or the Trinity is like a three-leaf clover, which has three parts, but they all come from one stem and all make up one plant.  There is a problem with these analogies.  Well, actually I think there are a couple of problems.  Firstly, the examples I’ve given are all heresies.   I mean that in its technical sense, in that they are distortions of Christian doctrine which have been condemned by the Church because they give an inadequate account of our Faith.  For those who’re interested, the water ice and steam analogy is the heresy of Modalism, I think the clover one is a form of tritheism or partialism, and the rugby team is… well the rugby team is just nonsense, but the Church has never found it necessary to explain why the nature of God is not basically fifteen angry blokes from Camarthen.

But the reason these explanations concern me is not so much that they come up with the wrong result – though I think they do – but that I think they’re probably trying to do the wrong thing in the first place.  I think this because of a line in the Athanasian Creed, one of the great statements of faith we hold to.   The passage I’m thinking of goes like this:

But the Godhead of the Father, of the Son, and of the Holy Spirit is all one, the glory equal, the majesty coeternal.

The Father eternal, the Son eternal, and the Holy Spirit eternal.

And yet they are not three eternals but one eternal.

But I don’t think this is a mistake in the creed, and I think it makes more sense if we look at the words involved.  “Incomprehensible”, meaning something that can’t be comprehended – from the Latin “comprehendere”, to be able to grasp something, to take it and hold it in your hand.  In fact we still have that idea in our casual English – when we explain something, we ask somebody to “grasp” it, we even say “have you got that?”, as if we’ve just passed them something an want to make sure it’s safely in their hand.  Geddit?  Goddit?  Good.

And here I think we see something of the danger of trying to “comprehend” the Trinity.  St Thomas Aquinas was very alert to this danger, and I’ve had most of this sermon’s ideas off him.  Because God cannot be “grasped”.  Because if we have grasped something and we have it in our hand, and we can take it away, then whatever it is, whatever it is in our hand, whatever we have got in our pocketses, as Gollum would say – that is not God.  And worse than that, it is something that we are treating as God, but is not God.  We see all too much of God being “grasped” in this way – there are people all over the world, and many of them are in positions of power – who “grasp” God, and then use God.  They turn God to their own ends, and put this idea of God to work for them. We have terrible examples of wars, of oppressions, of hatreds, which have been carried out by people who “grasped” their God, and used that God as a tool or a weapon.

This is a high doctrine, but it is suffused through the liturgies and the hymns and prayers of Christianity.  Reading the Athanasian Creed the other day, I was reminded of a mystical poem which some of us may know, which reflects upon the incomprehensibility of God.  I’d like to quote from it now.

Jesus’ love, says the mystic and poet, is very wonderful

So high, I can’t get over it

So low, I cant get under it

So wide, I can’t get round it – again a three-fold set of lines before the final reflection

It’s a fine poem, though my wife tells me some scholars believe it derives from the ancient Germanic epic We’re Going On A Bear Hunt.  And you might think I’m joking reading that song out, but I’m not.  That is a profoundly orthodox statement of one of the most ancient doctrines of Christianity, the incomprehensibility of the triune God.  That song knows – “so low I can’t get under it” – it says I cannot understand God.  I cannot under-stand God, can’t stand under God as if we’ve taken God to the garage, jacked God up and are now peering at the axles underneath.  I cannot – I should not – treat God as a thing, an object over there, to walk round and survey.  We find the same idea in the Bible – St John says Christ is the light of the world, and “the light shineth in the darkness, but the darkness has not understood it”.  In the Authorized Version that passage runs “the light shineth in darkness, and the darkness comprehended it not”.  The light was not captured, or grasped and snuffed out.

But if we cannot do all these things, if we cannot under-stand God, or comprehend God, or grasp God, what can we do?  I think the doctrine of the Trinity itself shows us the way.  The Trinity, that pouring out of Godself between persons and in  persons and through persons.  And what is poured out?  The Bible again – “for God is love, and those who live in love, live in God”.  Our own experience of love is helpful here, because we know that love has to be love between people, it can’t be grasped and taken away and used.  We know that love is a pouring out of the self, and that it cannot be comprehended or understood in the abstract, it can only be known by participation in love – the activity of loving and being loved.  So here is a hint of how we approach the triune God – by mimicking the outpouring of love which we seem to see in the heart of God’s self – by participating in what we are told is God’s nature.  Not by grasping God, but by God grasping us, so that we “live in God”.

And even this has a risk to it – even in saying “God is love, the Trinity is like our experience of loving and being loved and love itself”, I am taking a risk, because that too can become a pocket God.  God is love. Good.  I know what love is.  I’ve got God now.  But as we continually see, love can be misused, can be exploited, can be used to smuggle in greed and harm.  So taking “God is love” as a glib definition can be as harmful as any other shrinking of God.  I must remember that God is incomprehensible – that if God is love, then I come to the liturgy, I come to the altar, I come to the worship of God, to learn love.  To purify what I understand love to be, to show it more, to love more generously and truly.  To become caught up in the activity of love.  O, wonderful love.