Yesterday I picked up a fourteenth-century poem which I had not read before, and gave it a go.  Cleanness is one of the four anonymous poems in one famous manuscript, appearing alongside Sir Gawain and the Green Knight, Pearl and Patience.  I read both Gawain and Pearl as an undergraduate, and retained fond memories of both, though also a wary respect for the difficulty of their north-western dialect and style for someone more comfortable with south-eastern poets like Chaucer and Gower.  On a bit of a whim (possibly connected with reading some of Tolkien’s lectures on medieval studies), I picked up my undergraduate copy, and started in on Cleanness.

I decided to try to read it without translations or glosses, and was cheered to find how possible this was.  I stumbled a good deal, and I know I didn’t get every nuance, and had to look some words u.  But I found that wobbling through the original, and trying to get the sense without looking at modern English glosses, made me spend more time with individual lines.  Having to puzzle over the words encouraged more thought over the shades of meaning, and how they related (or didn’t) to later English.   When the line came out wrongly (because it produced a meaning I didn’t think the poet could have shaped), I had to work back and find where I’d got the wrong ideas, or projected a more modern notion onto it, which in turn meant more time thinking about the depths of the poem.

A notable example is the line I quoted above.  Nyf oure Lorde hade ben her lodezmon hem had lumpen harde.  It comes in the recounting of the story of Noah and the ark.  The poet adds an extra detail from the Biblical source, that the ark had no way to determine its own course, and stresses the storm which raged and swirled around them.  Then this line appears. 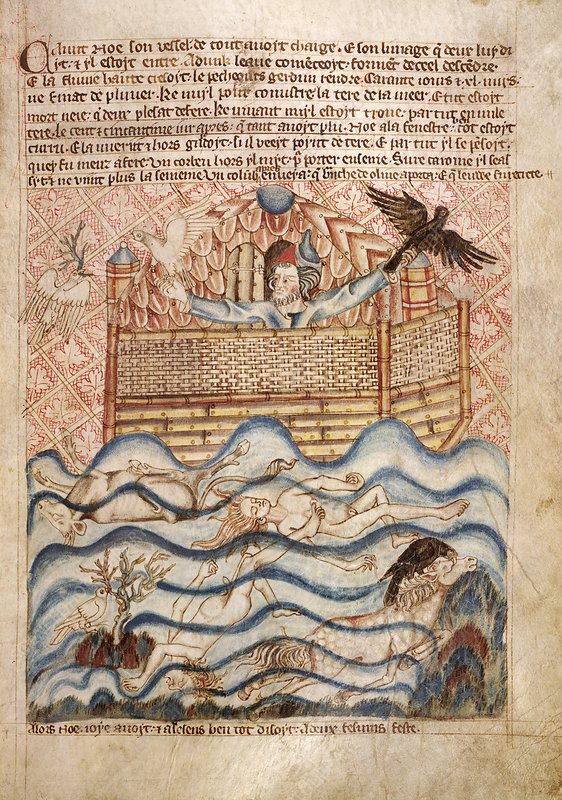 Some of it is (apparently) relatively straightforward.  “hade ben” is “had been” – recognizable from later English.  “hem had”, from previous forays into Middle English, I thought I could make out as “they would” or “would have…to/with them” (my grasp of cases not being good).  “oure Lorde” is “our Lord” garlanded with the terminal “-e” which is parodically familiar in older forms of English from the signs of Ye Olde Tea Shoppe and the like.

“Nyf” took a bit more thought, but looking at the structure of the sentence, and wondering what would make sense, I saw it was the equivalent of “ne if” or “if not”.  Thus “If our Lord had not been their lodezmon, they would have lumpen harde”.

As you’ve probably worked out, more quickly than I did, both phrases have equivalents in modern English.  Taking lodezmon first, and knowing this was a line about a ship being driven around by a storm, I guessed at “leadsman”.  I knew from reading the Aubrey and Maturin novels, not to mention one of Jane Austen’s favourite songs, “The Heaving of the Lead”, that the depth of water beneath a ship was measured by slinging a weight on the end of a line over the side, and marking how far it ran out.  (Hence cries of “by the deep nine!” and suchlike.)

But with a bit of thought, that didn’t seem right.  For a start, the phrase seemed a bit nineteenth-century, and I didn’t know that fourteenth-century ships did throw leaded lines over to find the depth.  And sketchy as my knowledge of etymology is, “lodez” somehow didn’t seem to fit with “leads”.  I was right about the naval context thought, as I realized I knew other sailing words with the sound (if not the look) of “lodez”.  “Lodestone” is a naturally magnetic piece of rock, usable as a compass if you hang it from a string, and “lodestar” is an old name for the Pole star, because you can also use it to navigate.

Thus “lodezman” would be the “compass-man”, or the person who navigated.  Another problem: surely fourteenth-0century ships didn’t have compasses?  So why would they have a word for the bloke who worked the compass?  Then I saw that I had the analogy the wrong way round.  I thought of a lodestone as a substitute compass, but for people in the medieval and early modern periods, the inverse was true: a compass was a replacement for a lodestone.  Thus “lode” must mean “direction” or “course” or something similar.  “Lodezmon” must mean not “compass-man”, but “course-setter” or “way-leader”.

The second phrase, “lumpen harde”, also had a modern analogy.  The slang phrase “you can like it or lump it”, meaning essentially “you can put up with something because you don’t have a choice” gave me a hint.  So “if our Lord had not been their course-setter, they would have had to put up with it either way”.  Again, that didn’t make sense.  It implied that God made no difference to the situation, which seemed to be the opposite of the line’s meaning.  I was misapplying the analogy.  “Like it or lump it”, in its pleasing alliteration, seems to contain both good and bad luck, and we also have the word “harde” in modern English in a figurative sense: “hard luck”, “hard cheese”, hard lines”, all generally meaning “rotten fortune”.

So “lumpen harde” might mean “have a bad fortune” or “suffer a terrible fate”.  Now that made sense of the line.  Nyf oure Lorde hade ben her lodezmon hem had lumpen hard.  “If our Lord had not been their course-setter, fate would have gone hard with them.”  I was reasonably sure I had an accurate sense of the line, via a few byways in later English.  But the time I’d had to spend on working it out meant I thought a bit more about it.

The extra-biblical detail of the ark without a rudder or mast was mentioned in a footnote as perhaps an idea influenced by medieval Celtic saints who pushed off into the sea on coracles and small boats, determined to let God steer them wherever they should go.  But it struck me that “our Lord” is a phrase more often used of Christ than God the Father.  Why might the poet have used that term?  The compass and the weighted line that I had discarded in translation might be of use here, in giving a shade of the meaning.  If Christ was guiding the ark, then he was bringing order to the chaos of the storm, and providing meaning in a formless world (all landmarks having been flooded.)

This suggested that the lodezmon fitted with Christ’s role as logos, the Word through which the world was created, and the meaning which orders the universe.  The flood would be returning the world to the same watery chaos seen in the Creation story, and Christ would be bringing forth order sweetly and strongly, renewing the meaning of the world.  The cosmological significance of the story was brought out more strongly by an apparent comparison between the two dramatic situations.

The connection between the ark and saints’ coracles suggested another link within the Bible, between Christ as lodezmon of the ark, and the calming of the storm.  There is an association which scholars and preachers have pointed out between the creation story and the calming of the storm on Lake Galilee, in which Jesus reveals himself as the logos who was present at creation by the specific act of bringing peace and order to a local storm.  I thought I detected the same sort of imagery here, linking the stories in ways I had not seen before.

I think it was the rather clumsy and haphazard translating work which made me focus more on the images and associations in these lines, and concentrated my attention on how and why the phrases had been chosen.  There are many delights in reading medieval poetry, and one of them is the shuttling back and forth between present meanings of words, and past meanings, and the combination of the familiar and the strange which appears at every turn.  And I obviously now want to introduce the word “nyf” to current English.

2 thoughts on “Our Lord the lodezmon: clumsy translation and a medieval ark”