I’ve had some cheering news recently: a scholarly article of mine is going to be published in the journal ELH (English Literary History).  It’s part of my ongoing work on the detective novelists of the British Golden Age, especially the so-called “Queens of Crime” – Agatha Christie, Ngaio Marsh, Dorothy L. Sayers and Margery Allingham – and their two successors, P.D. James and Ruth Rendell.  I thought this might be of interest to some of you, so I’ve included a PDF copy below.

The article is called “Midecentury Jacobeans: Agatha Christie, Ngaio Marsh, P.D. James and The Duchess of Malfi.”  As the title implies, it explores the ways those detective novelists quoted, adapted and engaged with Webster’s famous tragedy (and other Jacobean drama) in their books.  It focuses specifically on Christe’s Sleeping Murder, Marsh’s Singing in the Shrouds and James’ Cover Her Face: there are others I could have included, but these books seem to me to mark a cultural turning point. 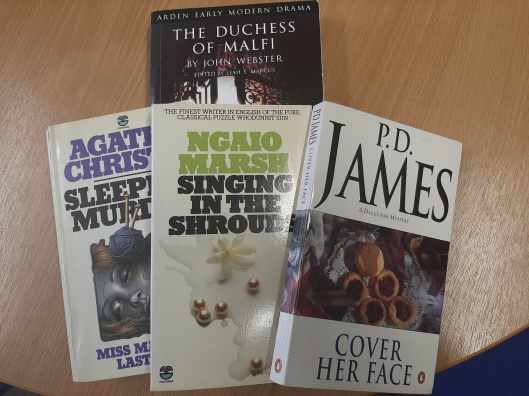 What particularly interests me about them is that they use The Duchess of Malfi to express a sceptical, critical attitude to the English cultural inheritance which is so often identified with the detective novel.  In one novel, Ngaio Marsh tempts the reader into displaying their knowledge of Shakespearean drama, only to turn the tables by suggesting that this knowledge is part of a sadistic and violent game.  In another, Christie shows a young New Zealander exploring her roots in the Britain she instinctively thinks of as “Home”, only to find incest and murder lurking in her family tree.

There are similarly “sceptical” and critical performances of Jacobean drama in the UK-US theatrical tradition.  Malfi has been a favourite play to express discontent with the supposed hypocrisy and corruption of the establishment.  But, as I learned as a PhD student in Early Modern theatre history, this movement is visible only from the 1980s and 1990s.  The notion of Jacobean drama as radical and transgressive is mostly absent before then.

Thus my article doesn’t just trace how these detective novelists borrowed bits from Jacobean drama. It argues that they reshaped the accepted meaning of that drama, and did so in ways which pre-dated the self-consciously radical art theatre of the late twentieth century. To risk a phrase, the missing link between T.S. Eliot and Cheek by Jowl is Agatha Christie.

I want to stress this point, because these writers are too frequently regarded as derivative and second-rate.  Raymond Chandler’s manifesto in the early 1950s declared that men were now taking charge of crime fiction, and would be indulging in violence and politics and other manly things.  Subsequent writing on the “Queens of Crime” has too often discarded the obvious sexism, but accepted the assumption that Christie, Sayers, Marsh and Allingham were apolitical, detached from reality and reactive.

Their adaptations of The Duchess of Malfi demonstrate that they were very far from reactive, and show them breaking new ground in their interpretation of the English literary past.  The history of Shakespearean criticism and theatre has a gap in the mid-century before the emergence of radical and critical ideas about Jacobean drama in the 70s, 80s and 90s.  Those ideas were present during this time, but they were being developed in detective fiction by women.

I hope the article makes for interesting reading – it has a lot more in it than I’ve sketched here, and most of it is more about the actual novels and less about the critical context.  I’d also like to thank Dr. Sarah Olive and Elizabeth Jeffery, whose ideas and ongoing research helped shape the article, most notably by an unplanned but fascinating conversation in the pub over the road from the Shakespeare Institute.