Apparently I am a media scapegoat. Young, white, British men are “the most derided group in Britain”, according to an article I read today by Rhiannon Lucy Cosslett.  Read with some surprise, I must admit, since I don’t remember anyone deriding me for my ethnicity, gender or indeed youth over recent years.  (To be fair, I’m getting increasingly safe from that last one with every passing year and belt-notch.)  Whilst I’m cheered to hear that young, white British men have defenders in the mainstream media, I’m not sure we need them, and I’ll try to explain why. 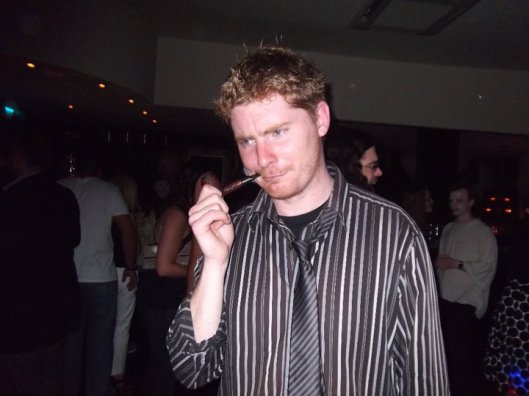 Me in my twenties, brooding on society’s unfair view of me.

The idea that we’re being “derided” comes from a reading of the British Social Attitudes Survey, in which it seems this demographic were the most expected to be “lazy”, “drunken” and “promiscuous”. Cosslett usefully demonstrates that many people are vulnerable to stereotyping, by suggesting jokily that the survey was taken mainly by “the nation’s Hyacinth Buckets outside Marks and Spencers”, before suggesting that this public image of young men is equally untrue, and carrying on to defend the moral character and social qualities of the young, white British men she knows.

In that moment of stereotyping I think she undermines the point being made. Not because it shows hypocrisy – she’s apparently showing that older female people can be stereotyped too – but because they’re two such different stereotypes.  On one side, young men.  On the other side, older women.  The latter are stereotyped as ineffectual, prissy, snobbish, frivolous and small-minded.  The former are stereotyped as…carefree, keen on drinking, and getting lots of sex.  Somehow these two stereotypes don’t quite equal each other.

The image of young men which Cosslett takes from the survey probably doesn’t ring true for her, when she looks around at her family and social group. It’s very irritating to be categorised as lazy, or drunken, or obsessed with sex.  Many young men no doubt feel this attitude towards them is unjustified, and would like to be regarded as sober, industrious and chaste.  But that’s not the same as being socially derided, as I see it.

Society is not prejudiced against young, white British men. Individual people might have negative views of them, which is a shame, and those views might build up a picture which young men would reject.  But that doesn’t amount to a social disadvantage.  The stereotyping of older women, which Cosslett brings up, prevents women being taken seriously in the workplace, reducing their earning power and their odds of getting a job.

The same stereotyping of women as narrow-minded and prone to being swayed by frivolous ideas leads to them being regarded as less believable in court, less effective scientists, less competent managers and less creative artists. The assumption that women’s interests and concerns are inherently less significant impacts the funding available for everything from women’s sports to refuges for those escaping domestic abuse.  The fact that middle-aged women are an easy target for disdain says a lot about social attitudes which value women for their sexual attractiveness and their pleasingness to men.

When young men are regarded as heavy drinkers and prolific shaggers, it does absolutely nothing to affect my chances of getting a job, or a mortgage, or a newspaper column. Even the apparent view that young men are “lazy” doesn’t prevent us from being employed in disproportionately senior roles across many industries, earning more over our careers than our female colleagues, or finding ourselves on the Board of Directors more quickly.  A board which we’ll probably feel at home on, since it’s likely to be made up of many more men than women.

If everyone thinks young white, British men are lazy, drunken and scrambled by our sexual urges, who the hell put us in charge of all this stuff? Shouldn’t someone stop us?  Why are we allowed to take clients out to dinner if we’re likely to just get hammered?  Why are we given high-paying jobs if we can’t be trusted to not slack off?  Why does the media pay so much attention to what we consider sexually attractive, if society finds our sexual obsessions contemptible?

I agree with a lot of what Cosslett says about young men: I like them, too. I think we need help in a lot of areas; in learning to express our emotions healthily, in thinking through our relationships, in appreciating the world around us and other people’s experiences.  But so many of our problems are because we’re too well defended.  As young, white, British men we’re encased in an aura of power which makes it difficult to admit weakness, or vulnerability.  Often those who admit those things do stop looking like “proper” men, and the others continue to benefit from their apparent invulnerability.  I appreciate Cosslett’s concerns, but we don’t need defending.  Honestly, we could do with a little less of it.

4 thoughts on “We Don’t Need Defending, Thanks: Being A Young, White, British Man”